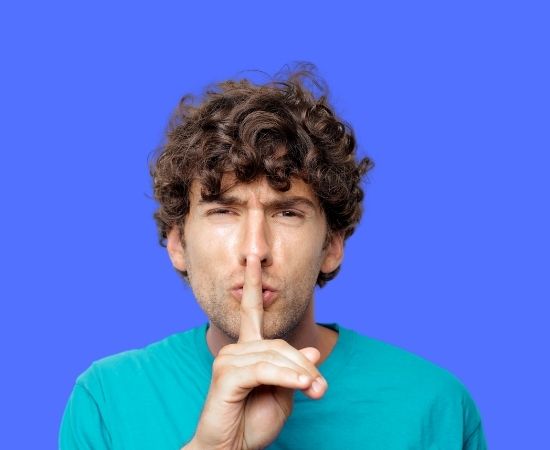 There are many silence quotes, and not speaking. Most people see silence as a form of respect. One example is, “Silence is the only response to sensuality.” There are many benefits that come with listening and not talking, such as learning.

Silence can be seen as an opportunity to reflect and process things without interruption. When you do not speak, it forces you to think more clearly about your words and what you want to say instead of just talking without thinking. 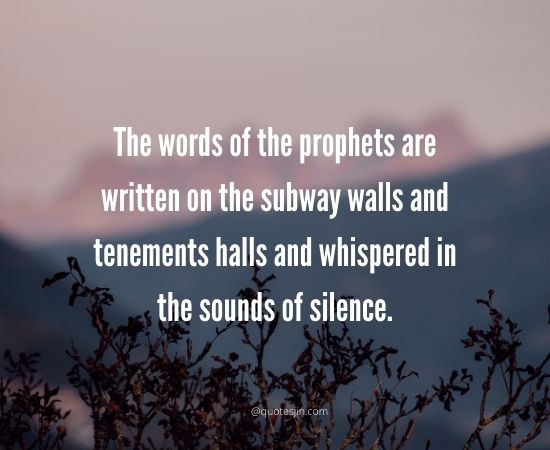 The words of the prophets are written on the subway walls and tenements halls and whispered in the sounds of silence.
– Paul Simon 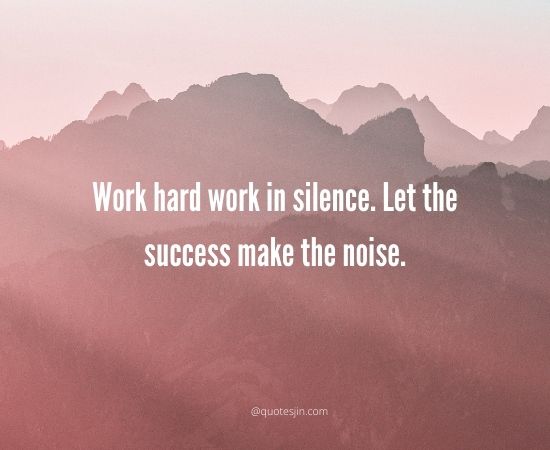 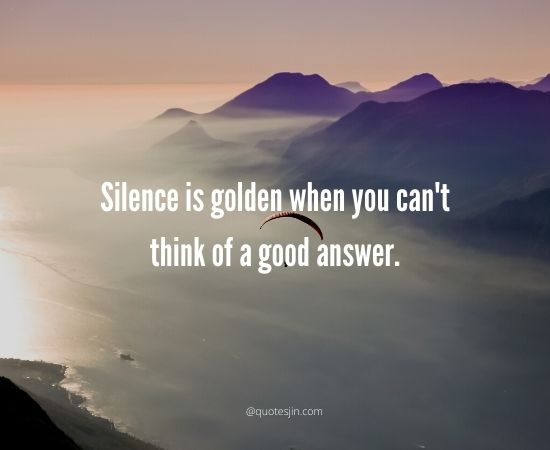 Silence is golden when you can’t think of a good answer. 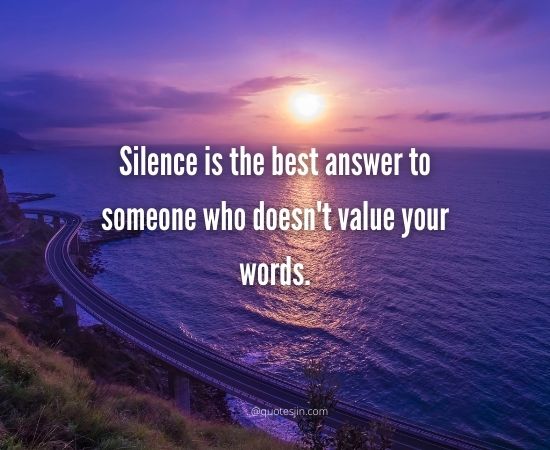 Silence is the best answer to someone who doesn’t value your words. 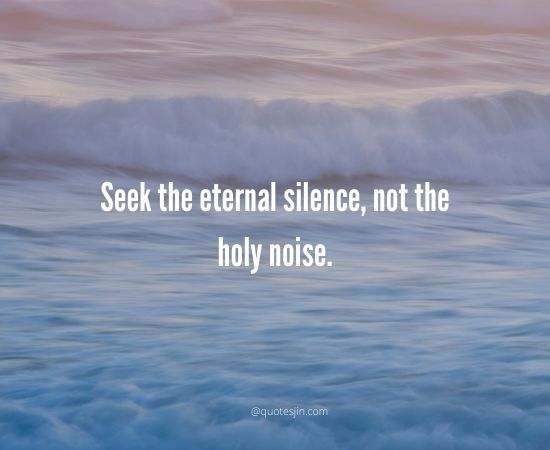 Seek the eternal silence, not the holy noise. 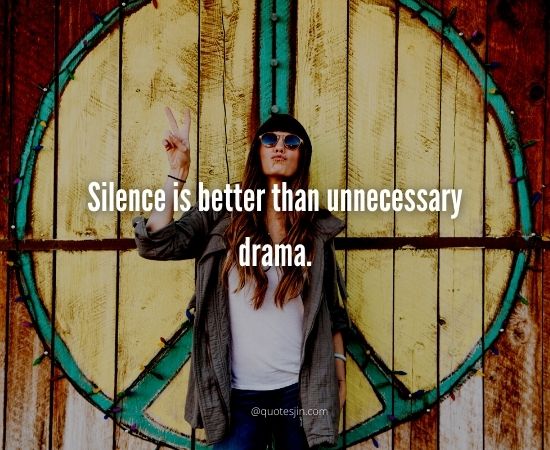 Silence is better than unnecessary drama. 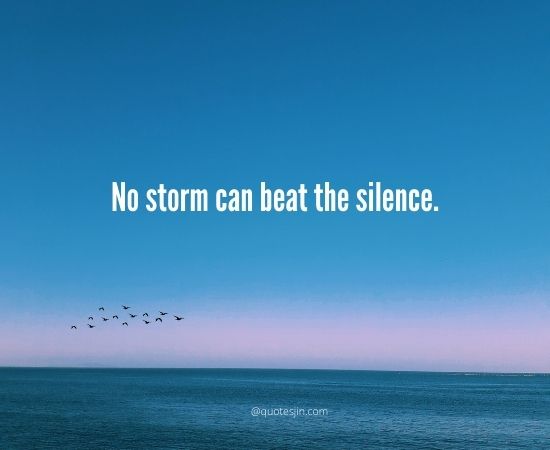 No storm can beat the silence. 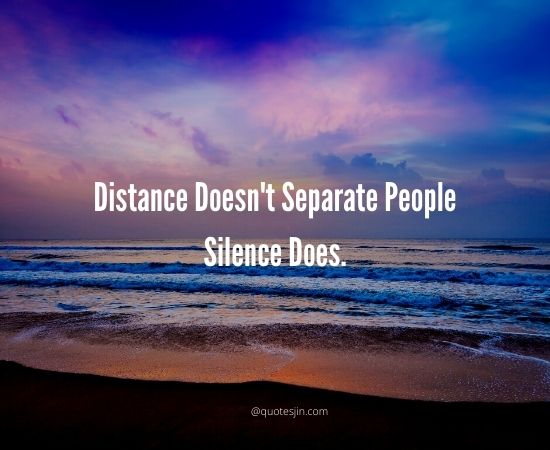 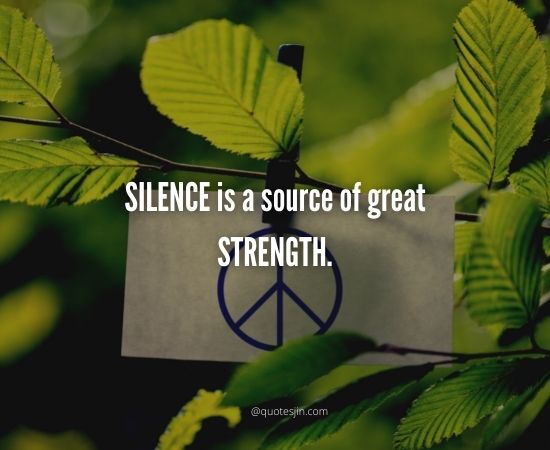 SILENCE is a source of great STRENGTH. 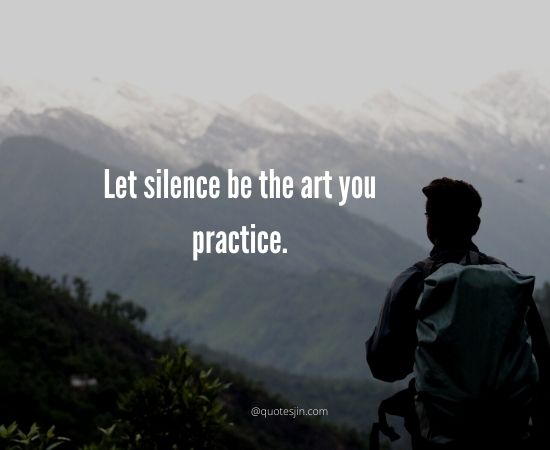 Let silence be the art you practice.
— Rumi 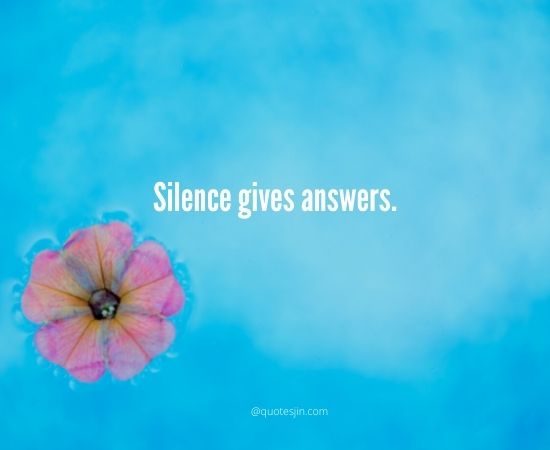 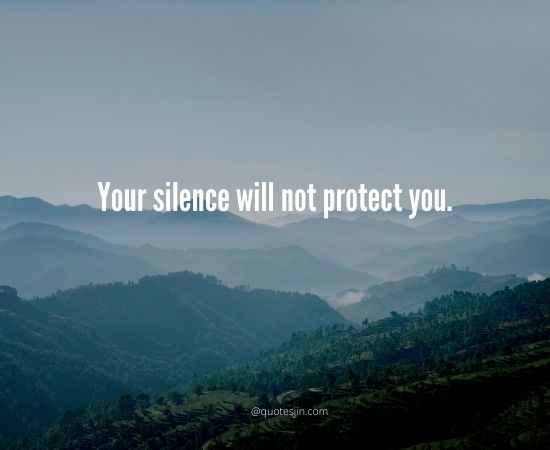 Your silence will not protect you.
– Audre Lorde 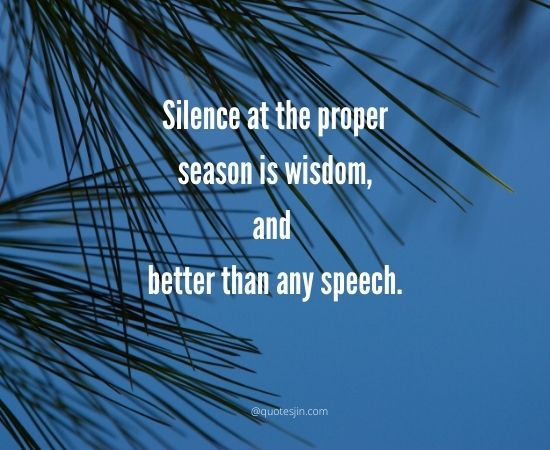 Silence at the proper season is wisdom, and better than any speech.
– Plutarch 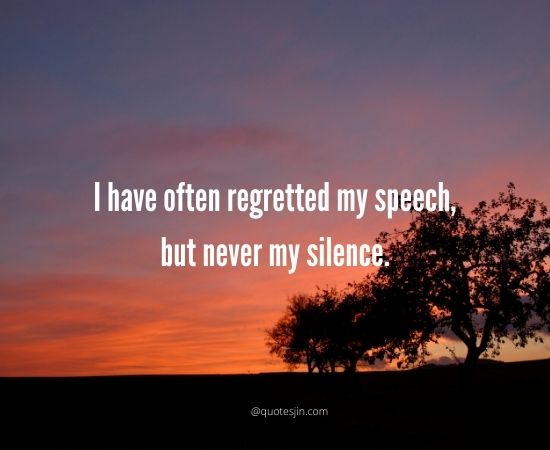 I have often regretted my speech, but never my silence.
– Publilius Syrus 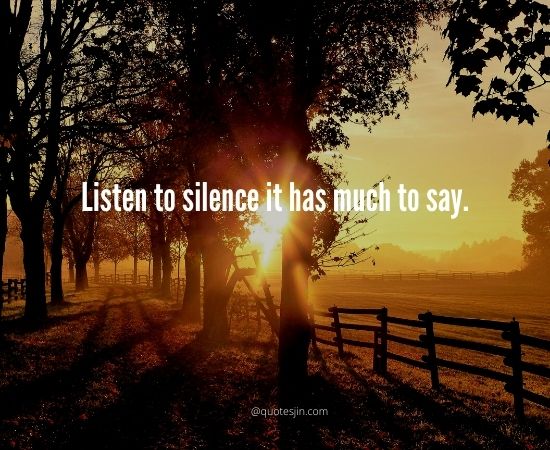 Listen to silence it has much to say.
– Rumi 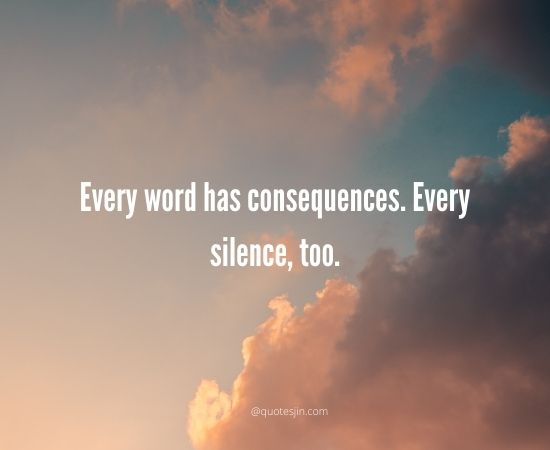 Every word has consequences. Every silence, too.
— Jean-Paul Sartre 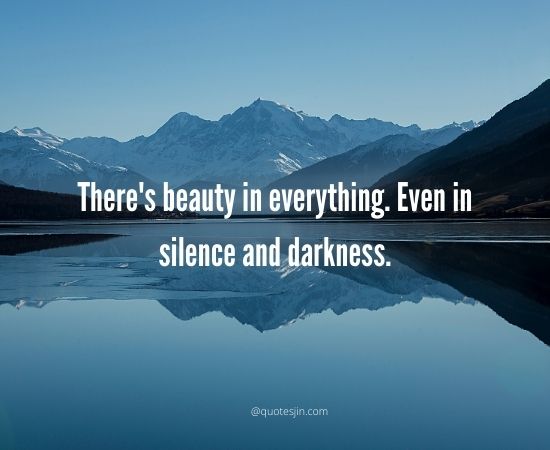 There’s beauty in everything. Even in silence and darkness.
– Helen Keller 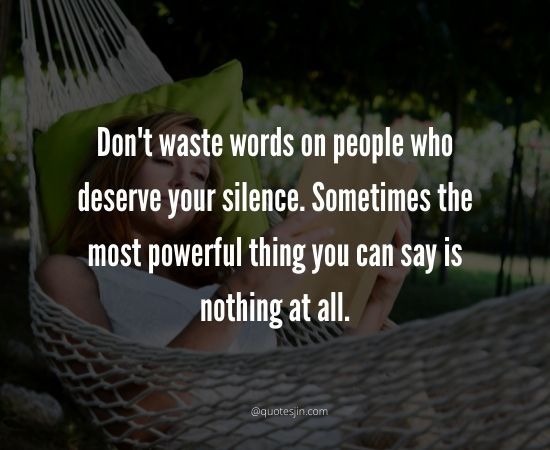 Don’t waste words on people who deserve your silence. Sometimes the most powerful thing you can say is nothing at all. 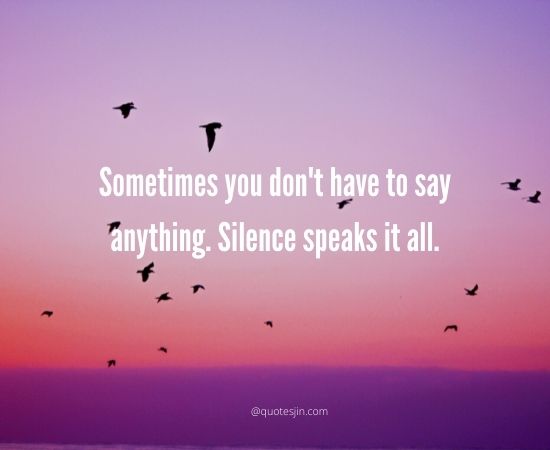 Sometimes you don’t have to say anything. Silence speaks it all.
– Disha Patani 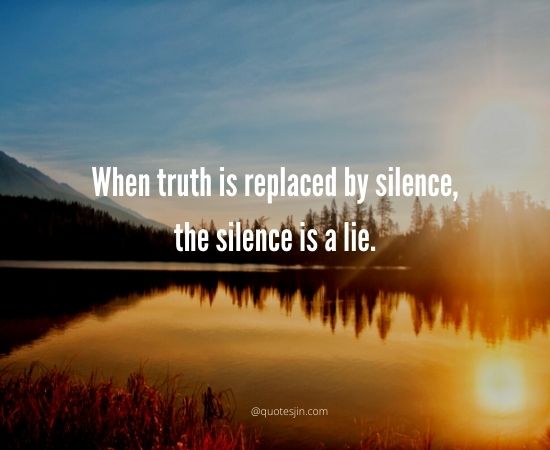 When truth is replaced by silence, the silence is a lie.
– Yevgeny Yevtushenko 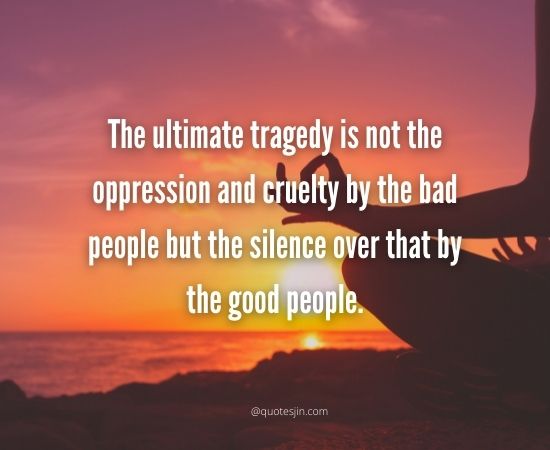 The ultimate tragedy is not the oppression and cruelty by the bad people but the silence over that by the good people.
– Martin Luther King, Jr. 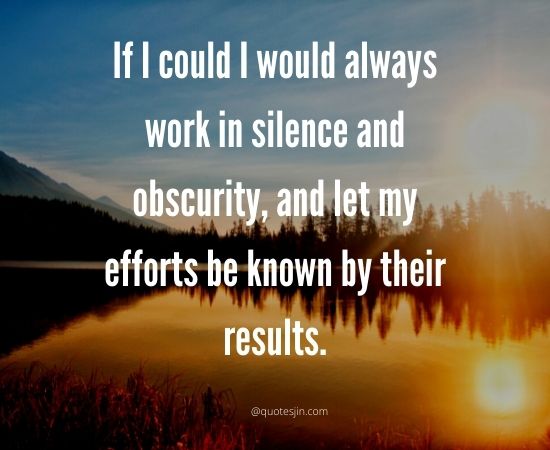 If I could I would always work in silence and obscurity, and let my efforts be known by their results.
– Emily Bront 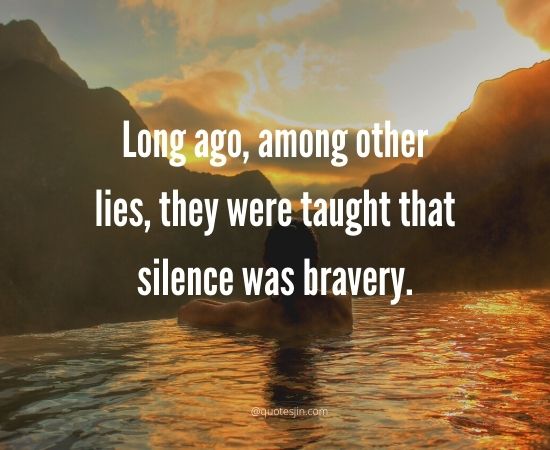 Long ago, among other lies, they were taught that silence was bravery.
– Charles Bukowski 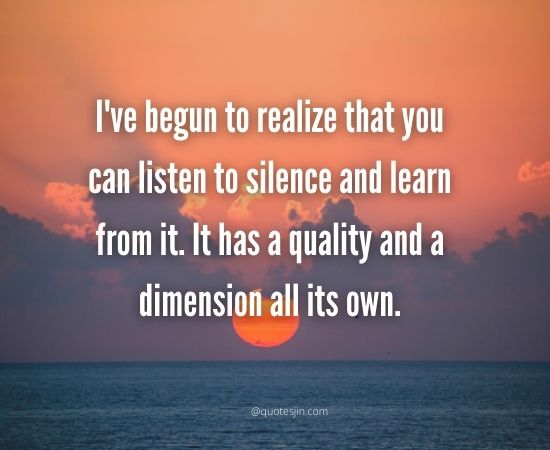 I’ve begun to realize that you can listen to silence and learn from it. It has a quality and a dimension all its own.
– Chaim Potok

Give Yourself the Gift of Silence.
– Wayne Dyer

Open your mouth only if what you are going to say is more beautiful than silence.

Speak only if you can improve the silence.
– Spanish Proverb

To anyone who is carrying a heavy heart in silence,..It’s gonna be ok someday.

Be silent or let thy words be worth more than silence.
– Pythagoras

I stop thinking, swim in silence, and the truth comes to me.
– Albert Einstein

No person is your friend who demands your silence, or denies your right to grow.
– Alice Walker

I don’t think…” then you shouldn’t talk, said the Hatter.
– Lewis Carroll

In the end, we will remember not the words of our enemies, but the silence of our friends.
― Martin Luther King Jr.

I have learned now that while those who speak about one’s miseries usually hurt, those who keep silence hurt more.
— C. S. Lewis

As a writer you try to listen to what others aren’t saying and write about the silence.

The memory’s wiles are cruel. In its silence, we forget. And in its perversion, it binds our hearts firmly.
– Vexen

Such silence has an actual sound, the sound of disappearance.”
– Suzanne Finnamore

If they can’t understand your silence, they never really understood your words.

Never miss a good chance to shut up.
– Will Rogers

Seeing her sitting there unresponsive makes me realize that silence has a sound.
– Jodi Picoult

If everybody thought before they spoke, the silence would be deafening.
– George Barzan

The world suffers a lot. Not because the violence of bad people. But because of the silence of the good people.

I have never regretted my silence. As for my speech, I have regretted it over and over again.

Open your mouth only if what you are going to say is more beautiful than silence.
– Arabic Proverb

The world suffers a lot. Not because the violence of bad people. But because of the silence of good people.
– Napoleon Bonaparte

I decided it is better to scream. Silence is the real crime against humanity.
– Nadezhda Mandelstam

I’ve begun to realize that you can listen to silence and learn from it. It has a quality and a dimension all its own.
– Chaim Potok

We went down into the silent garden. Dawn is the time when nothing breathes, the hour of silence. Everything is transfixed, only the light moves.
– Leonora Carrington

When words become unclear, I shall focus with photographs. When images become inadequate, I shall be content with silence.
– Ansel Adams

God is silent. Now if only man would shut up.
– Woody Allen

I can hear the roar of women’s silence.
– Thomas Sankara

Nothing strengthens authority so much as silence.
– Leonardo da Vinci

You have a grand gift for silence, Watson. It makes you quite invaluable as a companion.
– Arthur Conan Doyle

Silence is only frightening to people who are compulsively verbalizing.
– William S. Burroughs

In Silence there is eloquence. Stop weaving and see how the pattern improves.
– Rumi

The dreams that come, in awakening and silence. I find I am without myself once more.

It is not easy to keep silent when silence is a lie.
– Victor Hugo

After silence, that which comes nearest to expressing the inexpressible is music.
– Aldous Huxley

We should not accept in silence the benefactions of God, but return thanks for them.
– Saint Basil

The most profound statements are often said in silence.
– Lynn Johnston

Green was the silence, wet was the light, the month of June trembled like a butterfly.
– Pablo Neruda

Sometimes it is good to leap into the unknown. Practice leaping.
– Macrina Wiederkehr

I like the muted sounds, the shroud of grey, and the silence that comes with fog.
– Om Malik

The deepest feeling always shows itself in silence; not in silence, but restraint.
– Marianne Moore

Deep vengeance is the daughter of deep silence.
– Vittorio Alfieri

I like silence; I’m a gregarious loner and without the solitude, I lose my gregariousness.
– Karen Armstrong

Out of silence is born concentration, and from that comes learning.
– Stephen Hough

Silence speaks so much louder than screaming tantrums. Never give anyone an excuse to say that you’re crazy.
– Taylor Swift

Do not underestimate the determination of a quiet man.
– Iain Duncan Smith

To sin by silence, when we should protest, Makes cowards out of men.
– Ella Wheeler Wilcox

Once you mature you realize silence is more powerful than proving a point.

I drank the silence of God from a spring in the woods.
– Georg Trakl

My personal hobbies are reading, listening to music, and silence.
– Edith Sitwell

Does not everything depend on our interpretation of the silence around us?
– Lawrence Durrell

Stand amongst the ashes of a trillion dead souls and ask the ghosts if honor matters. The silence is your answer.”

Every word is like an unnecessary stain on silence and nothingness.
– Samuel Beckett

The predator wants your silence. It feeds their power, entitlement, and they want it to feed your shame.
– Viola Davis

Quiet is peace. Tranquility. Quiet is turning down the volume knob on life. Silence is pushing the off button. Shutting it down. All of it.
– Amir

Every language is a world. Without translation, we would inhabit parishes bordering on silence.
– George Steiner

Enjoying art is a personal matter. It’s made up by contemplation, silence, abstraction.
– Renzo Piano

Only let the moving waters calm down, and the sun and moon will be reflected on the surface of your being.”
– Deepak Chopra

To be wild is not to be crazy or psychotic. True wildness is the love of nature, a delight in silence, a voice free to say spontaneous things, and an exuberant curiosity in the face of the unknown.
– Robert Bly

True silence is the rest of the mind, and is to the spirit what sleep is to the body, nourishment and refreshment.
– William Penn

Silence is argument carried out by other means.
– Che Guevara

Speech is human, silence is divine, yet also brutish and dead: therefore we must learn both arts.
– Thomas Carlyle

Poetry is an orphan of silence. The words never quite equal the experience behind them.
– Charles Simic

The Silence of the Lambs’ is my favourite book, favourite film.
– Florence Pugh

There’s a degree of deception in silence.
– Don Lemon

My imagination functions much better when I don’t have to speak to people.
– Patricia Highsmith

As an artist I come to sing, but as a citizen, I will always speak for peace, and no one can silence me in this.
– Paul Robeson

There’s beauty and a quiet dignity in confidence. Confident people rarely over talk. They are never uncomfortable with silence, They allow their actions to speak for them, They say what they mean, They are authentic.

Blessed is the man who, having nothing to say, abstains from giving us wordy evidence of the fact.
– George Eliot

I don’t think that the spoken words solve everything. Sometimes silence delivers truer feelings while the words can distort the meaning in some situations. – Kim Ki-duk

The owl is nocturnal w/keen senses of sight & sound. It sees through the shadows of the night & hears the sounds in the silence – the illusion of the darkness. This teaches us to see past our own illusions & trust our intuition & perceptive senses.
– Anonymous

Learn to get in touch with the silence within yourself, and know that everything in life has purpose. There are no mistakes, no coincidences, all events are blessings given to us to learn from.
– Elisabeth Kubler-Ross